The Mean, the Median and the Mode are the most common measures of central tendency, used to describe the center of a distribution. Out of the three, the mean is the most commonly used one, but the median and mode are also widely used.

We need to distinguish between the sample mean, median and mode, and their population counterparts.

Typically, we are provided with a sample and we need to compute the sample mean, the sample median and the sample mode. These statistics are estimators of the corresponding population parameters. 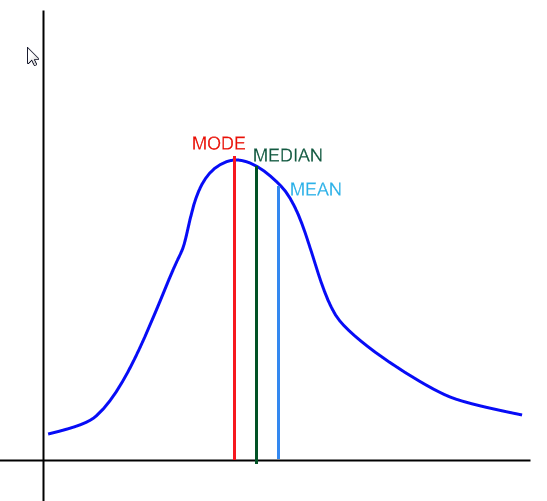 In the graph above you have an example of a how the median, mode and mean would look in a distribution.

The median, roughly, defines the point where 50% of the distribution lies to left of it, and to the right of it.

The mean corresponds to the weighted average of the values that the variable takes and their associated probabilities (\(\sum x \cdot p(x)\)). For a distribution, such weighted sum is either a summation or an integral. For a sample, we just compute simply the average of values in the sample.

How to Compute the Mean, Median and Mode for a Given Sample

If this value is an integer, then we find that the median is the value in the P th position in the sample in ascending order.

Then, the median is the average of values that are in positions \(P_L\) th and \(P_U\) th in the sample in ascending order. Don't worry, we will practice this with an example.

• For the Mean: Simple as well. The sample mean is calculated by using the formula

Find the mean, median and mode for the following sample:

The sample mean is therefore

Now for the median following table shows the data in ascending order:

The mode, which is the most repeated value, is 30.

What is larger, the mean, median or mode?

That is a question that pops up frequently. In general terms, there is not one answer for all distributions. This is, the answer depends on the distribution.

For a symmetric distribution we have : 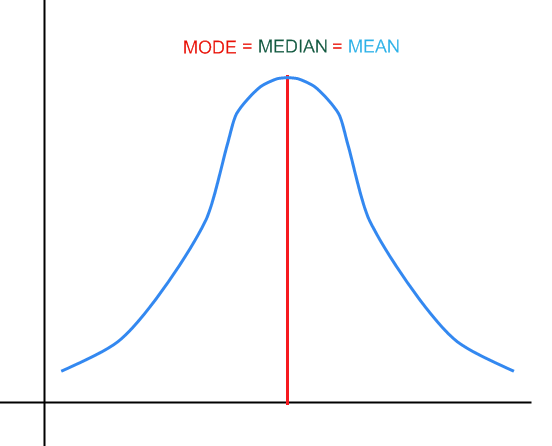 For a right-skewed distribution we have :

For a left-skewed distribution we have : 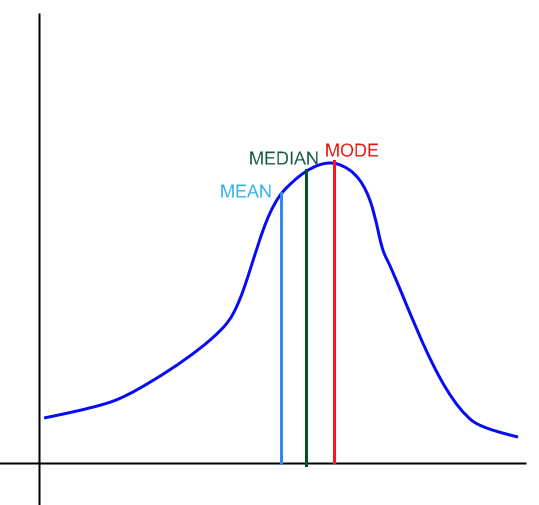 More About the Mean, Median and Mode

The median, mean and mode are broadly popular concepts that are used everywhere in Statistics. They represent measures of center, which attempt to give a value that is representative of the sample.

Depending on the level of measurement, we would use a different measure of center.

• For nominal data, we use the mode.

• For ordinal, non-quantitative data we use the mode as well as the measure of center.

• For ordinal, quantitative data we use the median or the mean as the measure of center.

• For interval and ratio data, we use the mean (or the median if the distribution is too skewed) as the measure of center.

The mean, median and mode are the most typically used measures of center. The mean and median are used for quantitative data, and the mode is used for categorical data.

For quantitative data, one would typically use the mean. With one caveat: the mean is very sensitive to outliers. This means that one outlier (either legitimate value or a typing error) could make a drastic difference on the value of the mean.

In such cases, when there are outliers or the distribution is fairly skewed, it is preferable to use the median as the most accurate measure of center, because the mean gets distorted by skewness or outliers.

If you need to see step-by-step solutions for the calculation of the mean and other measures of central tendency, check out descriptive statistics calculator . You can also find useful our 5-number summary calculator .

In case you have any suggestion, or if you would like to report a broken solver/calculator, please do not hesitate to contact us .