More About this Degrees to Radians Calculator

Different references for the full circle

When we measure an angle in degrees, the full opening of a circle will correspond to an angle of 360o. Then, the angles are computed proportionally to that references. This is, an angle corresponding to have of the full circle opening will be half of what is for the full opening, this is half of 360o, which is 180o

Now, if we measure an angle in radians the angle corresponding to the full opening of the circle is set as the perimeter of a circle of radius 1, this is \(2\pi\). In other words, you are measuring an angle in terms of how many radiuses need to be used to described the opening. This way, a 360 o angle corresponds to \(2\pi\) radians.

How to Convert Degrees to Radians?

Now, if you want to actually go and transform an angle in degrees to radians, what do you? This is what you do: If you have an angle \(d\) measured in degrees, and you want to convert it in a n equivalent angle \(r\) that is measured as in radians, you use the following formula:

The above formula applies whether you are converting decimals or fraction degrees to radians. All you need to do is to plug the number of degrees \(d\) into the formula 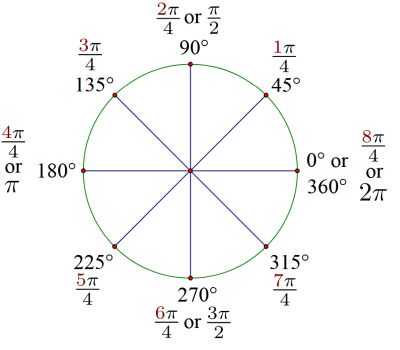 For those of you who work with Excel, you can use the function "=RADIANS(d)" to convert an angle d in degrees to radians.

If conversely you can use this other calculator to convert radians to degrees , which essentially applies the above formula but it solves for \(r\).

You can explore other trigonometric calculators, such as our double angle calculator , among many others.