Gaussian Elimination is a process conducted on matrices aimed to put a matrix into echelon form . Having a matrix in such form helps enormously to solving matrix equations very easily.

Technically, the process of conducting Gaussian elimination consists in finding a column with a pivot (which is the fancy slang for a non-zero element) that allows us to eliminate all the elements below the pivot. 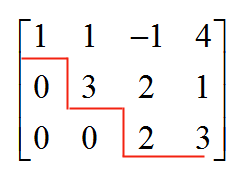 The term "echelon form" that is obtained by using Gaussian elimination becomes clear by looking at the matrix above, where the non-zero elements of the matrix have this echelon-like structure, as shown by the red line.

The Math Behind Pivoting and Gaussian Elimination

We are not going to get too technical into this, we only are going to try that you understand the motivation and the mechanics of this kind of elimination.

....Not so fast! That only works when the matrix \(A\) is invertible. To start, the matrix \(A\) has to be a square matrix, and then, its determinant needs to be different from zero. But you cannot multiply by the inverse for non-square matrices. So, how do you do it then?

You need to TRANSFORM the equation into one that is easier to solve.

Specifically, matrices in echelon form are matrices that lead to equations that are easy to solve (more about that later).

In other words, the matrix equations

So what we are going to do is to start with \(Ax = b\), and via multiplying by invertible matrices \(E\), we are going to arrive to an equivalent matrix equation that is much easier to solve .

Say that we are able to find a list of invertible matrices \(E_1, E_2, ..., E_n\) and we multiply (from the left) the original matrix equation to transform it into an equivalent equation, like:

Let us see why solving a matrix equation is much easier when you have it in echelon form. First imagine that you have the following matrix and vector:

How does it look? Well, not that neat. You would need to start juggling equations. There are more or less systematic approaches to solve this using things like elimination and such, but it is at least cumbersome.

Now, on the other hand, imagine that you have the following matrix and vector:

How does this one look? Well, not too shabby.

Therefore, in this case the system is solved trivially.

For systems associated to matrices in echelon form, it is straightforward to backtrack from the last equation to the first equation, to get the solutions.

How to Choose the Right Invertible Matrices

Now that we know that working with matrices in echelon form makes it really much easier to solve matrix equations, we should be wondering, what are the invertible matrices \(E_1, E_2, ..., E_n\) that will make \(\tilde A\) in echelon form.

How does Gaussian elimination work?

Interestingly enough, it is not hard to find these matrices \(E_1, E_2, ..., E_n\), which will be called elementary matrices.

So, you find a pivot, and potentially you need to make a row permutation (which is actually represented by multiplying by a certain an invertible matrix)

Step 2 : Once you have a pivot, eliminate all the elements in the current column, below the pivot.

This is done by multiplying the pivot row by a certain constant, and adding that to a row below the pivot, so that the element in the same column as the pivot is made zero.

Step 3 : Once all the elements below the pivot have been made zero by making appropriate row operations (which happen to be represented by the operation of an invertible matrix), move to the next column, next row, and look for a pivot from the row below of the row of the previous pivot and make the same procedure.

Step 4 : Repeat until you run out of columns or the matrix is in echelon form.

In order to solve the system, we need to go gaussian elimination. We choose the first pivot, starting with the first column. The element in the first row of the first column is 1, which is different from zero and then, it is used as a pivot. We use that pivot (1) to eliminate all the elements below it:

We will see that this row operations are achieved by multiplying by invertible matrix, so we have equivalent systems by doing so.

Now, moving to the next row, next column, we find a "-2", which is different from zero, and hence, it is used as our pivot. To eliminate the value below this pivot, we add to row 3 the values of row 2:

and now we stop, because the resulting matrix is already in echelon form. Now we back-track to solve the system:

Pivoting and using pivot elimination are the cornerstone foundation to solve linear systems. But it goes beyond that. If we only cared about linear systems, we would use Cramer's Rule , which works just fine for solving systems .

Gaussian elimination has the benefit that it gives a systematic way of putting matrices into row echelon way, which in turns leads to the quick obtainment of certain matrix decompositions (LU, LDU, etc), or even to the calculation of the inverse of the matrix.

The key of the pivot method for finding solutions is that the permutations and row operations are invertible matrices, so that system we are transforming at each step is equivalent to the original system.

Indeed, both the permutation of rows and row operations are represented by invertible matrices. Consider the matrix \(E_{ij}\), which is obtained by taking the identity matrix \(I\) and permuting its rows \(i\) and \(j\).

How About the Operations with Columns?

Sometimes we need to permute columns to find a pivot. In that case the we need to multiply the matrix \(E_{ij}\) from the RIGHT, and the result will be to get the columns \(i\) and \(j\) of \(A\) permuted.