Instructions: Use this tool to determine, showing all the steps, whether or not the two provided lines are parallel. Please type two linear equations in the boxes provided.

But naturally, there are algebraic ways to assess whether or not two lines are parallel. One of the simplest way is to use the slope criterion.

How to determine if two lines are Parallel?

There are a couple of ways:

The advantage of the graphical method is that it is simple, and it involves just taking a look at the graph, but naturally, in order to do so, you need to construct the graphs.

A disadvantage of the graphical method is that your eyes can deceive you. It may seems that the graph of lines do not intersect, but perhaps you are not graphing a big enough portion of the line.

An advantage of the algebraic method is that it is unequivocal. If the slopes coincide, the lines are parallel, and if they don't, then the lines are not parallel.

The one disadvantage of the algebraic method is that you need to take the work of formally computing the slope.

First, there is not one parallel line, there are actually infinite parallel lines, and the equation is \(y = a x + c\), for any \(c\).

If you don't have the lines already in slope-intercept format, you can always solve for y, or solve for x is you want to reverse the axes. 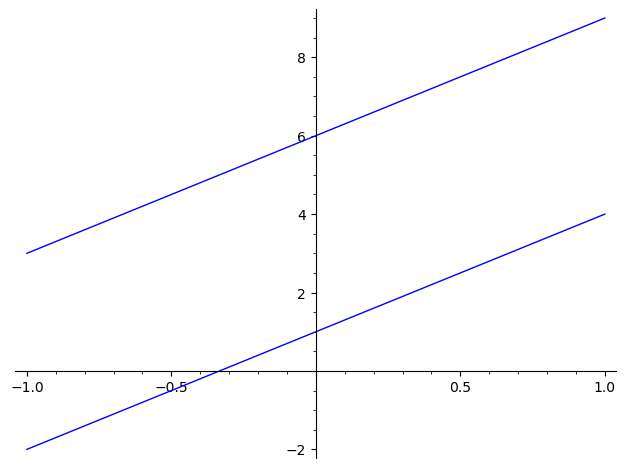 One exception is the case of two vertical lines, which are parallel, although we cannot compare the slopes because they are undefined.

If you have something like the slope-intercept form of the lines already given, you can directly assess whether or not the lines are parallel. Otherwise, you need the extra step of computing the slopes before comparing them.

Geometric interpretation of the graph of two parallel lines

Two lines that are parallel correspond to a system of equations with no solutions (or infinite solutions), where each equation represent one line.

Also, when the lines are not parallel they will intersect at one point and at one point only, which corresponds to a system of equations with a unique solution. 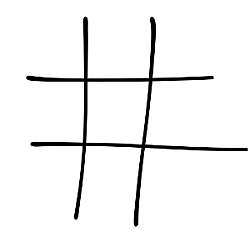 Now, solving for \(y\), the following is obtained

and simplifying all the terms that need simplification, we finally get the following