More about this exponential regression calculator

Moreover, regardless of the degree of linear association between the variables, the regression line is usually added, regardless. This could be misleading at times when the data does not follow a linear pattern and they follow instead some kind of a non-linear pattern, being the exponential pattern a commonly found one.

How do you calculate exponential regression?

First, you need to have data pairs of the form \((X_i, Y_i)\). Normally, when these data are at least loosely clustered around a straight line, a linear regression model is calculated by computing its coefficients via the Least Squares method.

When that happens, you also use the Least Squares technique to compute the coefficients of the exponential model, only that instead of applying on \(X\)'s and \(Y\), you do a little trick and apply to the logarithms of \(X\)'s and \(Y\)'s.

How can you do exponential regression by hand?

Actually, it is not recommended. Both the graphing of a scatterplot, calculation of model parameters and graphing of the exponential model required a good bit of mathematical calculations, for which reasons is very difficult to be done by hand.

It is highly recommended to use an online stats calculator like this one, or otherwise Excel or your favorite scientific calculator, but the "by hand option" is pretty much off the table. 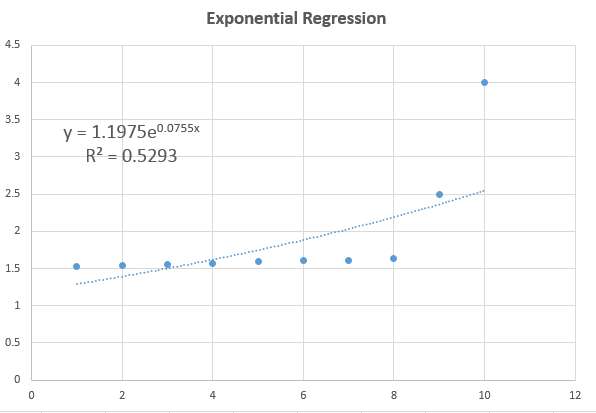 What is the difference between power regression and exponential regression?

What other graph tools can I use?

On the other hand, observe that if you there is absence of a linear pattern because the grow pace does not seem to be constant as X increases, it could be but it does not necessarily have to be an exponential model, because it can also be a power regression model or a polynomial regression model